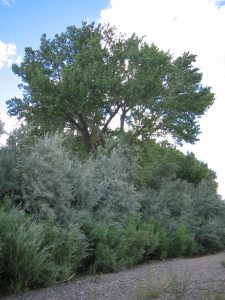 Have you ever thought about entering your school’s science fair? It’s a big question, because it requires that you have an idea for a project. You need a hypothesis. In very simplified terms, it means that you think if you take an action, then it will affect something in a certain way. You have no proof it will happen, but you are assuming it might. Your project will decide if your idea, your hypothesis, actually does what you think it will do.

That takes a lot of effort and planning. Here’s one idea that might interest someone enough to try. I’m not sure how easy it would be to prove, and you would need to ask adults who know a lot about science to help you figure out how to do it.

The idea involves clouds and how they can have more of a cooling effect on forests planted in mid-latitudes than they were once thought to have. One example of a mid-latitude area is the southeastern United States. It has hot, humid summers and mild, but frosty winters.

A really cool newsletter called Treehugger had an article in its August 27, 2021 newsletter about how planting forests at mid-latitudes could help cool the planet. It explained that a paper published Aug. 9 in the scientific journal, Proceedings of the National Academy of Sciences, suggested that climate models underestimate the role that clouds play.

Some scientists have thought that forests planted in mid-latitude locations could make our planet warmer instead of cooler. But the Aug. 9 paper suggested that planting forests at mid-latitudes come help to cool the planet because of clouds.

Clouds are very hard to study, but they do have a cooling effect on the Earth even though that effect may be short lived. They help to block the sun, so they reflect more sunlight, which creates a cooling effect.

Clouds form more often over forest areas. They tend to form earlier in the afternoon over those areas, so they are in place longer. That means they have more time to reflect solar radiation away from the Earth.

So, the cooling effect of the clouds, combined with the ability of forests to capture carbon, help to make the temperature a little cooler. When carbon is absorbed by trees, it helps to keep the Earth from heating up so fast. That means glaciers won’t melt quite as fast, flooding won’t be quite as bad, and changes in storm patterns may not be as severe, among other things.

How could you set up a science fair project that would show how clouds could affect forests planted in mid-latitude areas? I don’t have a clue. But if the idea intrigues you and you have adults in your family who are good at things like that, maybe together you could develop a pretty neat science fair project.

How to Thank a Tree To Speak for the Trees