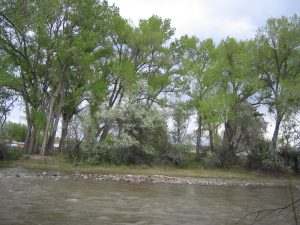 Trees cluster along the Animas River in northwest New Mexico.

Jane Goodall is famous for her work with chimpanzees and for her efforts to protect great apes and their habitat.

Now Jane has launched a tree-planting campaign. She is working with the United Nations’ Decade of Ecosystem Restoration, whose goal is to plant one trillion new trees by the year 2030. Goodall said that once the Earth had six trillion trees, but in the last 100 years the planet has lost half of them.

She wants to help restore ecosystems. An ecosystem is a geographic area in which plants, animals, weather and the landscape work together to form a place that promotes life. That would help chimpanzees and lots of other animals and plants as well.

The campaign is called Trees For Jane. People can help by planting trees or by donating money to the campaign.

Goodall says that planting trees is not a new solution to the problem of losing so many trees. But it is a tried and true one. It helps to stop deforestation and to restore lost forests.

Trees for Jane began after the Botanic Gardens Conservation International published a report called “State of the World’s Trees.” The landmark global report warns that one in three trees face extinction. Of the nearly 60,000 tree species in the world, about 30 percent are at risk of being lost forever, according to an article in Treehugger’s Sept. 30, 2021 issue. Those trees could be lost to activities such as agriculture, grazing, and logging way too many trees.

Jane expressed concern that global deforestation is continuing to occur so fast that an acre and a half is lost every second.

If you would like to contribute to Trees for Jane or learn what you can do in your own backyard to combat tree loss, go to https://www.treesforjane.org.