Plants Have Feelings Too 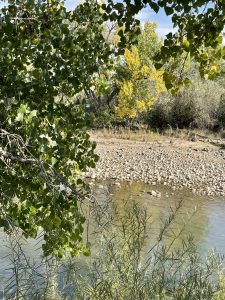 Cottonwood trees grow near a river.

Cleve Backster, who was a well-known lie-detector examiner, had an experience in 1966 that made him start studying plants and measuring their reaction to things that happened to them. Once when he had been up all night in a school he ran to teach people how to use lie detectors, he decided to try an experiment. Perhaps he was so tired that he’d started to feel a little silly. Whatever the reason, he attached electrodes from one of his lie detectors to the leaf of his house plant, a dracaena, which is similar to a palm tree. He wondered if the plant would be affected by water being poured on the leaf.

As the plant began to absorb the water, the galvanometer, which is part of the lie detector machine, graphed the reaction Backster would expect from a person whose emotions were stimulated. Intrigued, Backster dunked the leaf into a cup of hot coffee. He didn’t see any reaction on the meter. He wondered what would happen if he burned the leaf. As soon as he thought of doing that, the graph showed a huge reaction.

Backster hadn’t burned the leaf. He’d just thought about burning it. When he actually did burn a tiny spot on the leaf, the graph showed only a slight reaction. Backster wondered if the leaf sensed that he didn’t intend to cause much harm. He began to get excited. Over the next days and weeks, he performed many experiments to see if plants had emotions. Other scientists who heard about Backster’s work tried their own experiments and confirmed that plants do indeed have emotions.

When a friend told me about an experience she had with grape vines, I thought Backster and those other scientists might have been right. My friend lives in a rural part of town. Across the street from her property is a fence on which grape vines grew next to a field. The vines had been there for decades. People enjoyed walking by and eating the grapes.

Early one morning, my friend’s husband shook her awake and whispered urgently, “The grape vines are on fire!” She rushed outside to find fire engulfing the entire fence line. It had also started to burn the field. Firefighters soon arrived and put the fire out.

My friend looked through the charred remains to see if any grape vines had survived. She found a few, took them home, and put them in a bowl of water in her kitchen. As she looked at them, waves of grief engulfed her. She began to sob and sob, something that she normally didn’t do. It dawned on her later that she might have sensed sadness from the vines themselves.

If plants really do have emotions, maybe I can help them. Now when I walk by trees and flowers, I tell them how beautiful they are. I don’t know if that generates emotion in them, but if it does, then my small part of the world is just a little more cheerful.