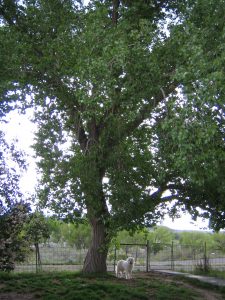 Lots of you may have played the game Tag, You’re It. Maybe it had a different title when you played it. There was a base that made you free from capture if you could reach it. The person who was “It” stood by that base and counted to whatever number was agreed upon by the players, maybe thirty, fifty or even one hundred. Everyone else ran as far away as they could, within the boundaries of the game, so they wouldn’t be tagged and become the next “It” person.

Sometimes that base is a tree. The “It” person hides their eyes and leans into the tree so they won’t see the other players running away. When the count reaches the agreed upon number, the “It” person tries to catch up with whoever is most reachable and tag that person, who then becomes the “It” person.

If you have a tree in your yard, that could be a great place to play the game. Get your family, friends, and neighborhood kids to come over and play the game with you. It can be lots of fun. If one person keeps getting tagged as the “It” person, it would be nice once in a while for people to volunteer to become the “It” person instead.

Afterwards, bring some apples, oranges, grapes or other fruit from your house so people can eat them for a snack.

On another day, you can gather at another neighbor’s house and play Tag, You’re It. It’s a great way to have fun with your friends.