The Toad and My Dog 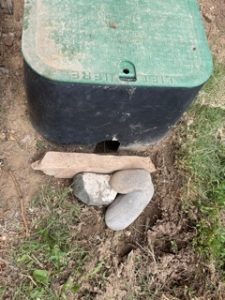 This week, my dog, Peanut, found great pleasure in chasing a toad. The traumatized toad tried to hide in a large mum beside the house. Peanut circled the mum, making sounds between a bark and an excited whimper. Unfortunately, the mum took a beating.

The toad found other shelter in a coiled up hose. Peanut did her best to dislodge the poor toad. Finally, I brought Peanut inside and shut her doggy door so she couldn’t get into the back yard. I hoped that would give the toad a little peace and quiet.

When I let Peanut out an hour later, I discovered that my dog not only had damaged the mum. She had also started to uproot the grass and dirt beside a plastic box that protects the sprinkler system faucets. That box is where the toad spends a lot of its time. It’s quiet and protected in that box. A round hole at one side of the box by the ground lets the toad come in and out. Peanut found that hole and was doing her best to dig into the box and reach the toad. She had made quite a mess!

I placed protective wire around the mum. I piled some rocks in front of the hole in the sprinkler box. There was space between the box and rocks for the toad to squeeze in and out. Since then, Peanut has left the mum and the hole alone. I don’t know if the toad will ever recover from being hunted by my dog.

Two years ago, that toad, or one of its relatives, played a useful role in my garden. Because of that, I have enjoyed having toads around. My butternut squash plants were taken over by squash bugs that year. I battled those bugs almost every day. One afternoon I realized I had an ally. I found a toad sitting at the base of one of the plants, waiting to snap up squash bugs with its long, long tongue.

Because the toads have been so helpful, I have felt protective of them. Peanut didn’t know any of that. All she knew was there was a moving critter that she wanted to chase. She likes to chase lizards too, and can spot them a long distance away.

It has been a challenge to let my dog enjoy playing outside but also protect the toad. Being outside in nature presents those kinds of dilemmas. I hope I have found a way to let both my dog and the toad enjoy the back yard in relative peace.

How to Chase the Blahs Away What Do You Like a Lot?